Bradford White Changes How we Look at Efficiency 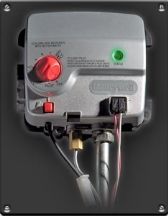 Bradford White understood that if their water heater was to go beyond the energy efficiency of a tankless type water heater, they would have to start with the question, “what are we trying to save?” The answer to that question was GAS. Obviously, their answer to the dilemma was NOT to put in a giant engine…like the 190,000 BTU one that runs the tankless. Their answer was to start with the valve that controls the fuel or gas to be burned to heat the water….not a smaller engine than is standard….just a smarter one….WAY smarter as a matter of fact.

The gas valve they designed is called ICON. Today’s SMART version of the standard gas valve. I know….your saying right now….REALLY? Is there nothing that we can’t make smart today? Well the answer is yes, there are a few things…including one of this writers children, but that’s another story ! BUT, Bradford White didn’t stop there !

Once the ICON valve was designed and perfected the company wasn’t satisfied with just the fuel savings from it. They demanded more from their engineers. With the new valve controlling the gas, they turned to the tank…the tank that the Tankless people claimed was the culprit of wasted fuel. The insulation surrounding the tank can only be as thick as the void between the tank holding the water itself and the exterior jacket or outside of the tank, so not much more could be gained in that area….what to do? Well again the engineers at Bradford White rose to the challenge and designed a thermostat. Yes a thermostat… but not just any kind of thermostat ! This thermostat looks and acts very similar to your home programmable thermostat, with the exception of it talking back and forth with the ICON gas valve. Through the use of the ICON system, Bradford White has single handedly take the tank type water heater into the 22nd century.

How Does All of This Work Together 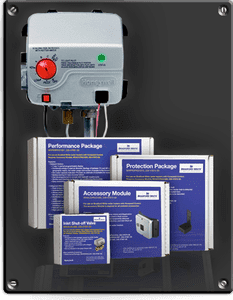 The Bradford White ICON system shuts the burner down during the times there is no demand for water. Like all night when you are sleeping, or all day while you are at work. Those times equate to lost dollars, heating water that does not need to be heated because no one is there to use it. So here is where the HUGE savings come in… during these times, that are totally controllable by the user, the ICON system allows the heater to cool to 99 degrees, saving on all the gas it would require to keep the water at the 125 degree operating temperature we had discussed earlier. The ICON system turns the gas back on and brings the temperature of the heater back up to 125 degrees an hour before you wake up… or get home so you never are inconvenienced. Once installed the home owner experiences no difference in the available hot water to their home…the only difference is in the amount they spend on gas to heat their water. “GREEN Technology?” You Bet! But it puts the GREEN where it should be…in your pocket!

Is There Anything Else Bradford White Did to This Water Heater?

Bradford White went another step further in their quest for energy efficiency, they added a mixing valve that allows the heater to be set a a higher 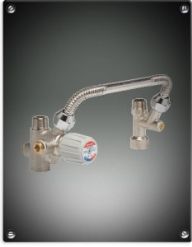 temperature, say 140 degrees and then tempers the water temperature down to 125 degrees as it leaves the heater. How does that save gas you might ask? Well here’s what those innovative engineers figured out… If you keep the tank at 140 degrees and mix cold water with the hot after it leaves the heater, you actually use less hot water to get the desired 125 degree water for use. The savings come in big time because the “Recovery” time of the heater, or the amount of time it takes to re heat the tank now that we’ve put water into it is greatly reduced. Henceforth the heater burns for less time to re heat or “Recover”

Now They Are Just Showing Off

To continue with the industry changing ideas they added an automatic shut off valve that will automatically shut off the incoming cold water to the heater in the event there is a leak in the tank. In other words…IT WON”T FLOOD YOUR BASEMENT ! As if that was not enough they went and made the working components, including the ICON gas valve completely replaceable without having to shut the water off to the heater !

The equipment costs are less than a properly installed tankless, it uses the existing exhaust gas system, it does not require any change to the existing gas pipe system. All of that equates to a lower installation cost! PLUS, the only maintenance suggested by the manufacturer is to hook a garden hose to the valve at the bottom and flush it out once a year, something a home owner can do themselves rather than paying a contractor to come in and perform a complicated de liming.

Or have it installed by Expert Plumbing Service at www.expertplumbers.com